by Exotic Adrian Street and the Pile Drivers 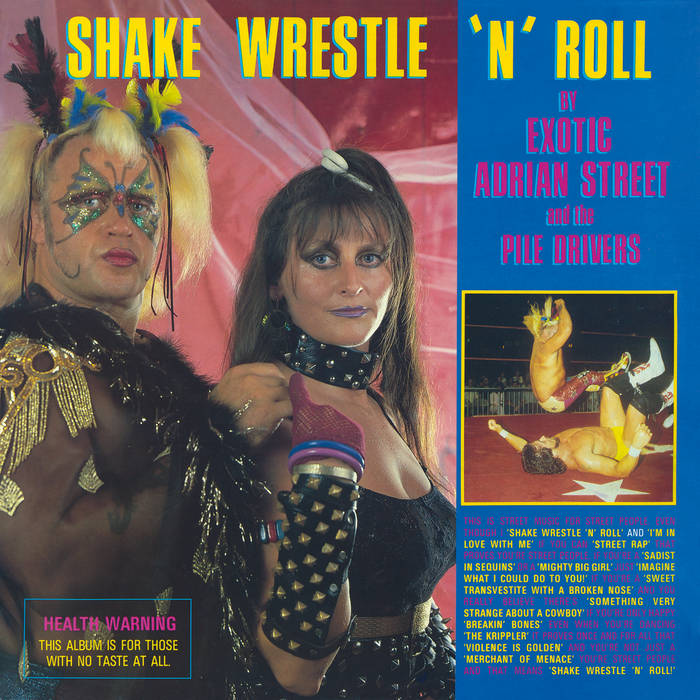 A Welsh coal miner who lifted weights with Sean Connery in the ‘50s, who was later refashioned into a “transvestite with a broken nose,” the Exotic Adrian Street was the first glitter kid rallying cry in the bone-crushing world of professional wrestling. “I needed the spotlight, not the darkness,” says Street, who left the cole mine’s and became a wrestler in 1957. He began by boxing for $2 dollars a fight all throughout England, but by the time Marc Bolan was Top of the Pops in 1971, Street was frolicking around international wrestling rings in his Crayola-bright wrestling trunks, silver lipstick, glittery cheeks, bleached blonde hair, and unmanly vanity — which made him wrestling’s most hated “heel,” and the punkest man in the business.

“Marc Bolan told a reporter he got the idea for his costumes from watching me,” says Street, who began his transformation into glam-metal grappler by singing in legendary British rock and roll coffeehouses like The 2i’s in Soho, where Gary Glitter got his start, to designing wardrobes for Chelsea fashion hive Granny Takes a Trip, where Elton John would walk in and ask if there was any of Street’s suits he could buy; it’s also where David Bowie would look for glamorous looks. “Ziggy Stardust is a carbon copy of what I was doing,” says Street, who’s bombast came to life when he wrote the lyrics to his own entrance theme, titled “Imagine What I Could Do To You,” produced and orchestrated by musician Don Woods, who took Street’s megalomaniacal charm and turned it into hummable glam-rock that blends the sinful stiletto-sweetness of Rocky Horror with Marc Bolan’s gift for catchy melodies.

The process began in 1974, with Street’s entrance song, and eventually led to 12 bizarrely pop recordings with music videos attached to each and released in 1986 as Exotic Adrian Street and the Pile Drivers' Shake Wrestle ’N’ Roll. Street, who sings such dazzling lyrics as “tough as Marciano and as sexy as Mae West,” has since written seven books, some named after his music, which include such delicious ​titles a “Sweet Transvestite with a Broken Nose” and “Sadist in Sequins” along with a music video for “I’m in Love With Me” that was, according to Street, produced by Michael Jackson’s videographer and later borrowed by “The King of Pop” — never to be returned! “So I began using a loaded rhinestone glove to flatten my opponents,” say Street, who claims, quite seriously, that he hated Joan Collins, but loved her clothes. He also cut off Dusty Rhodes’ hair and feuded with the legendary “Macho Man” Randy Savage, so his vain superficiality is never to be questioned.

For it's 30th anniversary, Burger Records is now reissuing the cult classic Shake Wrestle ’N’ Roll on July 18th with all the original artwork depicting Street with his sensational valet and wife, the Lovely Linda. The repressing will be flattened, much as Street would do to his opponents’ noses, on CD, vinyl, and cassette."

Originally released on Exotic Records in 1986

A Welsh coal miner who lifted weights with Sean Connery in the ‘50s, who was later refashioned into a “transvestite with a broken nose,” the Exotic Adrian Street was the first glitter kid rallying cry in the bone-crushing world of professional wrestling. ... more

Bandcamp Daily  your guide to the world of Bandcamp

Khruangbin and Greg Foat stop by with their amazing new LPs.